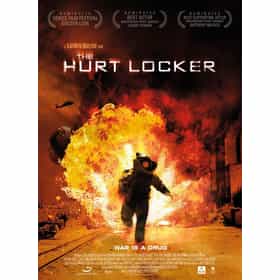 The Hurt Locker is a 2008 American film about a three-man Explosive Ordnance Disposal team during the conflict in Iraq. The film was produced and directed by Kathryn Bigelow and the screenplay was written by Mark Boal, a freelance writer who was embedded as a journalist in 2004 with a U.S. Army EOD team in Iraq. It stars Jeremy Renner, Anthony Mackie, and Brian Geraghty. The film premiered at the Venice Film Festival in Italy during 2008. After being shown at the Toronto International Film Festival, it was picked up for distribution in the United States by Summit Entertainment. In May 2009, it was the Closing Night selection for Maryland Film Festival. ... more on Wikipedia

lists about The Hurt Locker

The Best Quotes From The Hurt Locker 18 votes The best The Hurt Locker quotes make you realize how great the movie really is, even if you haven't seen it in a while. Let'...

The Hurt Locker is ranked on...

The Hurt Locker is also found on...