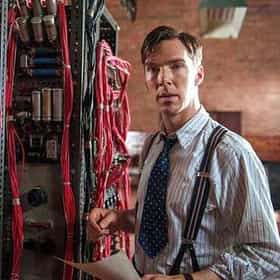 The Imitation Game is a 2014 historical thriller film directed by Morten Tyldum, with a screenplay by Graham Moore loosely based on the biography Alan Turing: The Enigma by Andrew Hodges. It stars Benedict Cumberbatch as the British cryptanalyst Alan Turing, who helped solve the Enigma code during the WWII and was later prosecuted for homosexuality. The film's screenplay topped the annual Black List for best unproduced Hollywood scripts in 2011. ... more on Wikipedia

The Imitation Game is ranked on...

#140 of 374 The 50+ Best War Movies Ever Made, Ranked 520.6k VOTES From classics like Saving Private Ryan to newer entries like Dunkirk and 1917, this list ranks the best movies about war, ba...
#292 of 672 The Most Overrated Movies of All Time 744.6k VOTES The most overrated movies of all time in one list, ranked in order of how overrated they really are. Being overrated doesn't...
#717 of 6,106 The Best Movies Of All Time 5.7M VOTES These are the best movies of all time, ranked by movie experts and film fans alike. What are the greatest movies in cinema h...
#15 of 160 The Best Movies of 2014 66.1k VOTES Sure there are the Oscars, Golden Globes, and a number of other award ceremonies that hand out trophies to movies that are v...
#8 of 22 The Least Accurate Movies About Historical Figures 16.6k VOTES The lives of historical figures have provided Hollywood with film fodder for decades. Biographical movies aren't necessarily...
#15 of 32 The Best Drama Movies of 2014 691 VOTES Let's get dramatic... There were a lot of great drama movies released in 2014, but which were the greatest? This list of the...
#3 of 52 The Best Movies No One Saw in 2014 9.5k VOTES Let's face it, nowadays there are so many movies in theaters that it's almost impossible to see them all. Add to that the fi...
#9 of 12 Historical Movies You Most Want To Change The Ending Of 857 VOTES Generally speaking, historical movies do their best to recreate what occurred in real life. It's no surprise Titan...
#17 of 133 The Best Drama Movies Of The 2010s Decade 1.8k VOTES What are the best drama films of the decade? That's what this list will determine, based on your votes. We want you to choos...
#11 of 140 The Very Best Biopics About Real People 13.1k VOTES List of the best biopics ever made, as ranked by film critics and movie fans. History is filled with remarkable individuals ...
#2 of 21 The Best Movies About Real Scientists 1.2k VOTES This list of the best scientist biopics contains numerous highly-lauded films. Winner of four academy awards, A Beautiful Mi...
#180 of 228 The Best Biography Movies 2.3k VOTES A list of all the best biography movies ever made, many of which are streaming on Netflix and Amazon Prime. This biopic movi...
#7 of 44 The 25+ Best Keira Knightley Movies of All Time, Ranked 3.3k VOTES The best Keira Knightley movies show that she’s capable of great range. Her filmography includes action blockbusters, histor...

The Imitation Game is also found on...