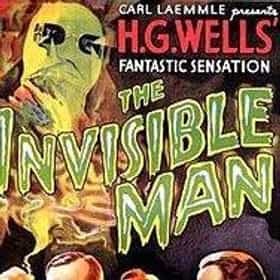 The Invisible Man is a 1933 science fiction film based on H. G. Wells' science fiction novel The Invisible Man, published in 1897, as adapted by R. C. Sherriff, Philip Wylie and Preston Sturges, whose work was considered unsatisfactory and who was taken off the project. Produced by Universal Studios, the film was directed by James Whale and stars Claude Rains, in his first American screen appearance, and Gloria Stuart. It spawned a number of sequels, plus many spinoffs using the idea of an "invisible man" that were largely unrelated to Wells' original story. Rains portrayed the Invisible Man mostly only as a disembodied voice. Rains is only shown clearly for a brief time at ... more on Wikipedia

The Invisible Man is ranked on...

#235 of 769 The Best Horror Movies of All Time 1M VOTES Horror movies, ranked by adrenaline junkies worldwide. Anyone can vote on this CrowdRanked list, and can even add your own f...
#261 of 347 The Best Movies Based On Books 136.3k VOTES List of the best movies based off books, voted on by cine-bibliophiles everywhere. Many movies are based off of books but wh...
#75 of 103 The Best Halloween Movies for Kids 29.7k VOTES Halloween movies for kids include some holiday classics and some newer films that are quickly becoming classics. The best Ha...
#160 of 167 The Greatest Graphic Novels and Collected Editions 46.4k VOTES A list of the best graphic novels and collected editions (trade paperbacks). The best graphic novels and collected editions ...
#23 of 46 The Greatest Classic Sci-Fi Movies 30.9k VOTES Terrifying monsters and unwelcome visitors from space frightened movie-goers in classic sci-fi movies. The best old sci fi m...
#7 of 20 What Are The Best Universal Monster Films? 2.9k VOTES For well over a decade, Universal Studios released a slew of monster films that became classics almost instantly. There are ...
#211 of 567 The Greatest Sci-Fi Movies of All Time 550.6k VOTES What are the greatest sci-fi movies of all time? Science fiction films are among the most popular movies in cinematic h...
#45 of 214 The Best Universal Studios Movies List 11.4k VOTES List of Universal Studios movies, ranked best to worst, including trailers, genres, and release dates. Universal Studios pro...
#12 of 38 The Best Golden Age of Horror Movies 2.3k VOTES The Golden Age of Hollywood began at the end of the silent era in American cinema in the later part of the 1920s and lasted ...
#5 of 45 The Best '30s Horror Movies 1.1k VOTES This list of the best 1930s horror movies features some truly terrifying tales of murder, monsters, and mayhem. Fans of the ...
#45 of 209 The Best Classic Horror Movies 83.1k VOTES If you’re a true horror film enthusiast then you’ll recognize these famous directors and the movies that earned them worldwi...
#8 of 115 The Best Old Horror Movies 32.2k VOTES The best old horror movies include classic scary films designed to terrify. Early horror movies tapped into our deepest fear...
#118 of 377 The Greatest Suspense Movies 22.5k VOTES A list of all the best suspense movies ever made, many of which are streaming on Netflix and Amazon Prime. Find out if your ...
#3 of 49 The Best Claude Rains Movies 1.1k VOTES List of the best Claude Rains movies, ranked best to worst with movie trailers when available. Claude Rains's highest grossi...
#4 of 34 The Best '30s Sci-Fi Movies 466 VOTES The greatest ‘30s sci-fi movies feature many of the same creatures and characters that would go on to dominate the genre for...
Filmsite's Great Films With No Academy Award Nominations 4.1k VIEWS Filmsite says: "Although the Academy of Motion Picture Arts and Sciences® has awarded many deserving honors to its ...