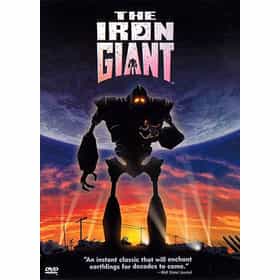 The Iron Giant is a 1999 American animated science fiction comedy-drama film using both traditional animation and computer animation, produced by Warner Bros. Animation, and based on the 1968 novel The Iron Man by Ted Hughes. The film was directed by Brad Bird, scripted by Tim McCanlies, and stars Jennifer Aniston, Harry Connick, Jr., Vin Diesel, Eli Marienthal, Christopher McDonald, and John Mahoney. The film is about a lonely boy named Hogarth Hughes raised by his mother, who discovers an iron giant who fell from space. With the help of a beatnik artist named Dean McCoppin, they have to stop the U.S. military and a federal agent named Kent Mansley from finding and destroying the ... more on Wikipedia

The Iron Giant is ranked on...

The Iron Giant is also found on...