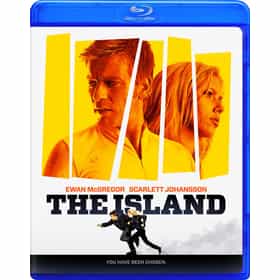 The Island is a 2005 American science fiction action thriller film directed by Michael Bay, starring Ewan McGregor and Scarlett Johansson. It was released on July 22, 2005, in the United States and was nominated for three awards, including the Teen Choice Award. It is described as a pastiche of "escape-from-dystopia" science fiction films of the 1960s and 1970s such as Fahrenheit 451, THX 1138, Parts: The Clonus Horror, and Logan's Run. The film's plot revolves around the struggle of Ewan McGregor's character to fit into the highly structured world he lives in, isolated in a compound, and the series of events that unfold when he questions how truthful that world really is. ... more on Wikipedia

lists about The Island

The Best Quotes From The Island 113 votes The best The Island quotes make you realize how great the movie really is, even if you haven't seen it in a while. Let's ran...

The Island is ranked on...

The Island is also found on...