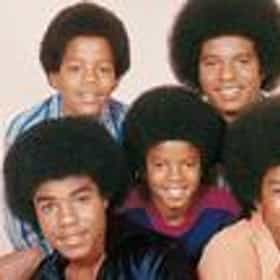 The Jackson 5 (stylized as the Jackson 5ive), later known as the Jacksons, were an American pop band composed of members of the Jackson family. The group was founded in 1964 in Gary, Indiana by brothers Jackie, Tito, and Jermaine, with younger brothers Marlon and Michael Jackson joining soon after. They were among the first black American performers to attain a crossover following, preceded by the Supremes, the Four Tops, and the Temptations. The Jackson 5 performed in talent shows and clubs on the Chitlin' Circuit, then signed with Steeltown Records in 1967 and released two singles. In 1968, they left Steeltown Records and signed with Motown, where they achieved 16 top-40 singles on ... more on Wikipedia

lists about The Jackson 5

The Best Jackson 5 Albums of All Time 468 votes The Jackson 5 are considered one of the most influential boy bands and greatest pop bands of all time. List of the best Jack...
Every Member of The Jackson 5, Ranked Best to Worst 1.7k votes From "ABC" to "I Want You Back," "I'll Be There" to "The Love You Save," every son...