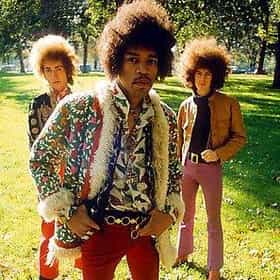 The Jimi Hendrix Experience was an English-American rock band that formed in Westminster, London, in September 1966. Composed of singer, songwriter, and guitarist Jimi Hendrix, bassist and backing vocalist Noel Redding, and drummer Mitch Mitchell, the band was active until June 1969. During this time they released three successful studio albums. After Redding left the band in mid-1969, Hendrix and Mitchell continued to work together on other projects. The Experience reunited in 1970, with Billy Cox on bass, until Hendrix's death in September. Redding died in 2003, and Mitchell died in November 2008. Widely recognized as hugely influential in the development of the hard rock and heavy ... more on Wikipedia

The Jimi Hendrix Experience is ranked on...

#31 of 620 People who voted for The Jimi Hendrix Experience... People on the West Coast are 2x more likely to vote for this The Greatest Live Bands of All Time 333.3k VOTES List of the greatest live bands or artists of all time, created and ranked by music fans worldwide asks the question "w...
#48 of 81 The Best Trios Of All Time 34.3k VOTES Remember the old phrase, "Three's a crowd?" Sure, it's earnest when you're dealing with a tandem bicycle or t...
#4 of 115 The Best Musical Trios Of All-Time 35.7k VOTES Across all types of music what is the best 3 piece band ever? Add your own favorite band...heck even country works... countr...
#20 of 277 Rank the Rock N Roll Hall of Fame Inductees 310.5k VOTES Update: Follow Ranker's official New Rock 2020 playlist on Spotify! A complete list of bands and artists inducte...
#8 of 92 The Best Opening Act You've Ever Seen 15.6k VOTES What are the best opening acts you've ever seen? These are the bands and musicians that blew you away, making you a fan fo...
#13 of 73 The Best Jam Bands 15.2k VOTES Since the 1960s, jambands have been wildly popular. Known for spacey, extended jams and solos, the best jam bands have devel...
#60 of 676 The Best Alternative Bands/Artists 200.9k VOTES At the end of the 1980s, at the peak of glam rock and hair metal, a new genre began to emerge from the underground. Since it...
#7 of 160 The Best Blues Rock Bands and Artists 43.9k VOTES Combining bluesy improvs over traditional 12-bar blues, blues rock bands are some of the most important bands in music histo...
#2 of 74 The Best Acid Rock Bands of All Time 24.3k VOTES initially rising to prominence in the 1960s, acid rock became a harder, LSD-infused brand of psychedelic rock. What separate...
#16 of 110 The Best Protopunk Bands/Artists 14.8k VOTES Protopunk artists list, with photos, ranked best to worst by votes. List of good protopunk bands includes a filter so you ca...
#1 of 34 The Best Psychedelic Soul Bands/Artists 393 VOTES Psychedelic soul artists list, with photos, ranked best to worst by votes. List of good psychedelic soul bands includes a fi...

The Jimi Hendrix Experience is also found on...