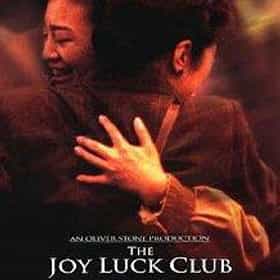 The Joy Luck Club is a 1993 American film about the relationships between Chinese-American women and their Chinese mothers. Directed by Wayne Wang, the film is based on the eponymous 1989 novel by Amy Tan, who co-wrote the screenplay with Ronald Bass. The film was produced by Bass, Tan, Wang and Patrick Markey, while Oliver Stone served as an executive producer. Four older women, all Chinese immigrants living in San Francisco, meet regularly to play mahjong, eat, and tell stories. Each of these women has an adult Chinese-American daughter. The film reveals the hidden pasts of the older women and their daughters and how their lives are shaped by the clash of Chinese and American ... more on Wikipedia

The Joy Luck Club is ranked on...

#246 of 803 The Greatest Chick Flicks Ever Made 417.7k VOTES Here's a list of the greatest chick flicks ever, ranked by fans and casual critics like you. The best girl movies are those ...
#379 of 710 The Best Movies Roger Ebert Gave Four Stars 161.9k VOTES List of movies Roger Ebert gave four stars, ranked best to eh. This is NOT a complete list of all of Roger Ebert's four star...
#113 of 238 The Best Movies for Women 30.9k VOTES The films on this list of the best movies for women have been ranked as the absolute best. From wedding movies to rom-coms, ...
#13 of 26 Great Movies About Old Ladies 381 VOTES Aging women are often self-confident, wise, and often overlooked by youth-obsessed society - perhaps that's what makes ...
#4 of 30 People who voted for The Joy Luck Club... are 63x more likely to vote for Panic Room on this list are 63x more likely to vote for White Oleander on this list The Best Mother-Daughter Movies Ever Made 4.1k VOTES Good movies that mothers can watch with their daughters can be important for bonding time. The best mother-daughter movies c...
#18 of 60 The Best Feminist Movies 6.4k VOTES A list of the best feminist movies ever made, ranked by film fans' votes. This list is ordered by popularity, so only the gr...
#41 of 41 The Best Chick Flicks From The '90s 173 VOTES The decade that gave us the first Harry Potter books also put out some good chick flicks. This list of the best '90s ch...
Ew.com's 24 Great Movies to Watch With Mom 3.9k VIEWS EW's list of the best movies to watch with your mother. Moms will especially appreciate these movies. For the full article a...

The Joy Luck Club is also found on...