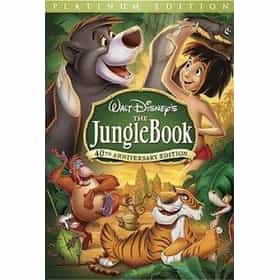 The Jungle Book is a 1967 American animated film produced by Walt Disney Productions. Inspired by the Rudyard Kipling's book of the same name, it is the 19th animated feature in the Walt Disney Animated Classics series. Directed by Wolfgang Reitherman, it was the last to be produced by Walt Disney, who died during its production. The plot follows Mowgli, a feral child raised in the Indian jungle by wolves, as his friends Bagheera the panther and Baloo the bear try to convince him into leaving the jungle before the evil tiger Shere Khan arrives. ... more on Wikipedia

lists about The Jungle Book

The Jungle Book Was Originally Written To Prove That White People Are The Superior Race 19.4k views Rudyard Kipling is an author that critics have a hard time making their minds up about. On the one hand, he provided generat...
The Real-Life Inspiration For Mowgli In The Jungle Book Was A Feral Child Raised By Wolves 1.3M views Many believe that Dina Sanichar, the Indian wolf boy, was the inspiration behind Rudyard Kipling's famous work, The Jungle B...

The Jungle Book is ranked on...

The Jungle Book is also found on...