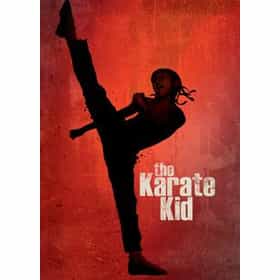 The Karate Kid is a 2010 Chinese-American martial arts drama film directed by Harald Zwart. It stars Jackie Chan and Jaden Smith, and it was produced by Jaden's parents Will and Jada. It is a remake of the 1984 film of the same name and the fifth installment of the Karate Kid series, serving as a reboot. Principal photography took place in Beijing, China; filming began around July 2009 and ended on October 16, 2009. The Karate Kid was released theatrically in the United States on June 11, 2010. The plot concerns a 12-year-old boy from Detroit, Michigan who moves to Beijing, China with his mother and runs afoul of the neighborhood bully. He makes an unlikely ally in the form of his ... more on Wikipedia

The Karate Kid is ranked on...

The Karate Kid is also found on...