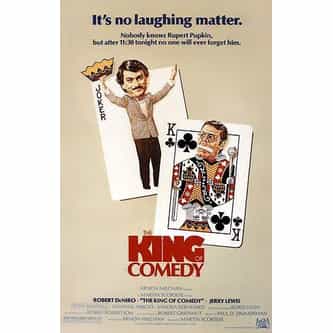 The King of Comedy is an American black comedy film starring Robert De Niro and Jerry Lewis. Directed by Martin Scorsese and written by Paul D. Zimmerman, the film focuses on themes including celebrity worship and American media culture. 20th Century Fox released The King of Comedy on February 18, 1983 in the United States, though the film was released two months earlier in Iceland. The film began shooting in New York on June 1, 1981 to avoid clashing with a forthcoming writers' strike, ... more on Wikipedia

The King of Comedy IS LISTED ON