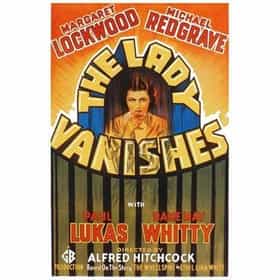 The Lady Vanishes is a 1938 British comic thriller film directed by Alfred Hitchcock and starring Margaret Lockwood, Michael Redgrave, Paul Lukas and Dame May Whitty. Written by Sidney Gilliat and Frank Launder based on the 1936 novel The Wheel Spins by Ethel Lina White, the film is about a beautiful English tourist travelling by train in Europe who discovers that her elderly travelling companion seems to have disappeared from the train. After her fellow passengers deny ever having seen the elderly lady, the young woman is helped by a young musicologist, and the two proceed to search the train for clues to the old woman's disappearance. The film features Basil Radford and Naunton ... more on Wikipedia

The Lady Vanishes is ranked on...

The Lady Vanishes is also found on...