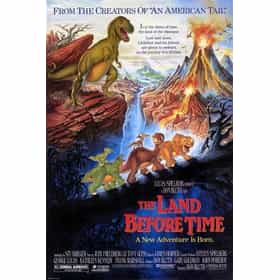 The Land Before Time

The Land Before Time is a 1988 American-Irish animated adventure drama film directed and co-produced by Don Bluth and executive produced by Steven Spielberg, George Lucas, Kathleen Kennedy, and Frank Marshall. Produced by Sullivan Bluth Studios and Spielberg's Amblin Entertainment, it features dinosaurs living in the prehistoric times. The plot concerns a young Apatosaurus named Littlefoot who is orphaned when his mother is taken out by a Tyrannosaurus. Littlefoot flees famine and upheaval to search for the Great Valley. ... more on Wikipedia

The Land Before Time is ranked on...

#30 of 598 People who voted for The Land Before Time... People in the South are 2x more likely to vote for this People in the Central US are 2x more likely to vote for this The Best Animated Films Ever 974.2k VOTES The best animated movies of all time are an assortment of animated movies that rank among the best movies ever made. Wh...
#1136 of 6,106 The Best Movies Of All Time 5.7M VOTES These are the best movies of all time, ranked by movie experts and film fans alike. What are the greatest movies in cinema h...
#232 of 241 The Most Inspirational Movies Ever 47.8k VOTES This inspirational movies list, with videos, includes some of the most uplifting films of all time. Inspiring films do not c...
#120 of 571 The Greatest Movies Of The 1980s, Ranked 527.1k VOTES Since it was one of the greatest decades for film, here's a list of the best movies of the 80s. These are the most popu...
#40 of 257 The Best Movies for 10-Year-Old Kids 101.6k VOTES The films on this list of the best movies for 10 year olds have been ranked by the community as the best films for this age ...
#318 of 341 Popular Things You're Just Not Interested In 192.9k VOTES Face it, when it comes to solid taste, majority doesn't always rule. It's time to take a good long look at popular thin...
#61 of 318 The Best Movies for Kids 201.9k VOTES If you have kids, you know you are always on the lookout for a movie that they will love and that you can sit through withou...
#10 of 12 Dark Deleted Scenes That Were Wisely Cut From Animated Movies 4.1k VOTES While it's nice to believe that scenes cut from animated movies are usually too silly or irreverent to be included, the trut...
#4 of 15 The Saddest Animal Death Scenes in Movies That Make You Cry Like a Baby 6.3k VOTES Why do animal deaths in movies make us so sad? Like blubbering, stammering, sobbing-mess kind of sad? Everyone hates seeing ...
#12 of 61 The Best Movies for 3 Year Olds 19.7k VOTES The films on this list of the best movies for 3 year olds have been ranked as the best by the community for this age group. ...
#40 of 100 The Highest-Grossing G Rated Movies Of All Time 781 VOTES Look for the G rated movies that made the most money at the box office? Then you are in the right place, here are the highes...
#2 of 15 Silly Movies That Would Be Better If Werner Herzog Narrated Them 146 VOTES Have you ever wondered what movies with voiceover would look and sound like without voiceover? How different would The Wolf ...
#108 of 464 The Best Feel-Good Movies 446.7k VOTES Want to feel warm and fuzzy inside? This is a ranked list of the best feel-good movies that make us experience all the good ...
#6 of 214 The Best Universal Studios Movies List 11.7k VOTES List of Universal Studios movies, ranked best to worst, including trailers, genres, and release dates. Universal Studios pro...
#3 of 46 The Best '80s Cartoon Movies 8k VOTES The 1980s brought a ton of explosive, bright, fun cartoon movies to the silver screen. Classics like The Little Mermaid and ...
#33 of 238 The Best G-Rated Children's Movies 15k VOTES This list takes the best G-Rated children's movies and pits them against each other to see once and for all which movie is t...
#9 of 21 The Best George Lucas Movies 2.3k VOTES A list of the best George Lucas movies, ranked from best to worst. George Lucas's highest grossing movies have received a lo...
#2 of 50 The Best Adventure Movies for 8 Year Old Kids 304 VOTES It’s hard to hold the attention of a young child for two hours. However, this list of adventure movies for 8 year old kids m...
#3 of 41 The Best Movies for 8 Year Old Boys 225 VOTES Kids today have a lot of different ways to entertain themselves. This list of good movies for 8 year old boys should be adde...

The Land Before Time is also found on...