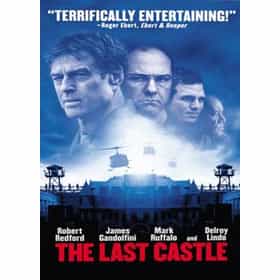 The Last Castle is a 2001 American action drama film directed by Rod Lurie, starring Robert Redford, James Gandolfini, Mark Ruffalo and Delroy Lindo. The film portrays a struggle between inmates and the warden of a military prison, based on the United States Disciplinary Barracks at Fort Leavenworth. A highly decorated U.S. Army Lieutenant General, court martialed and sentenced for insubordination, challenges the commandant, a colonel, over his treatment of the prisoners. ... more on Wikipedia

The Last Castle is ranked on...

The Last Castle is also found on...