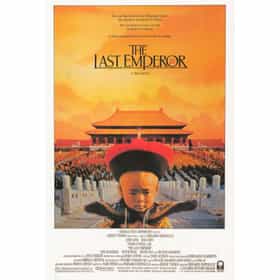 The Last Emperor is a 1987 biographical film about the life of Puyi, the last Emperor of China, whose autobiography was the basis for the screenplay written by Mark Peploe and Bernardo Bertolucci. Independently produced by Jeremy Thomas, it was directed by Bertolucci and released in 1987 by Columbia Pictures. Puyi's life is depicted from his ascent to the throne as a small boy to his imprisonment and political rehabilitation by the Communist Party of China. The film stars John Lone as Puyi, with Joan Chen, Peter O'Toole, Ruocheng Ying, Victor Wong, Dennis Dun, Ryuichi Sakamoto, Maggie Han, Ric Young, Vivian Wu, and Chen Kaige. It was the first feature film for which the producers were ... more on Wikipedia

The Last Emperor is ranked on...

#752 of 1,699 The Most Rewatchable Movies 3.3M VOTES There are some movies that I always stop at and watch if I see them on TV or I can put in the DVD player and watch when I'm ...
#752 of 6,114 The Best Movies of All Time 5.6M VOTES These are the best movies of all time, ranked by movie experts and film fans alike. What are the greatest movies of all time...
#49 of 93 People who voted for The Last Emperor... People Age 30 to 49 are 2x more likely to vote for this The Very Best Oscar-Winning Movies 212.3k VOTES All of the best Oscar winning movies that won the Oscar for Best Picture. Currently, there are 90 movies that have won the h...
#217 of 582 The Greatest Film Scores of All Time 227.7k VOTES This list contains greatest movie themes and scores ever recorded, chosen by the Ranker community. (NOTE: This list is for f...
#158 of 575 The Greatest Movies Of The 1980s, Ranked 509.1k VOTES Since it was one of the greatest decades for film, here's a list of the best movies of the 80s. These are the most popu...
#287 of 710 The Best Movies Roger Ebert Gave Four Stars 160.2k VOTES List of movies Roger Ebert gave four stars, ranked best to eh. This is NOT a complete list of all of Roger Ebert's four star...
#189 of 601 The Greatest Epic Movies Ever Made 273.2k VOTES Need some movie ideas? Check out this list of the best epic films of all time, which encompasses some of the best movie...
#35 of 107 The Best Movies of 1987 9.6k VOTES A list of the best movies of 1987, from light dramas like Dirty Dancing to comedies like Spaceballs.The '80s were a decade w...
#56 of 126 The Best Oscar-Winning Scores 9.6k VOTES What is best Oscar-winning musical film score? This list includes every film score that has won an Academy Award. Oscar-winn...
#8 of 25 The Best Oscar-Winning Movies Based on True Stories 1.4k VOTES We don’t have the math on this or anything, but movies based on true stories tend to win more Best Picture awards at the Osc...
#170 of 318 The Best Political Films Ever Made 24.6k VOTES Political movies can approach the notion of politics and government from numerous perspectives, and with many wildly diverge...
#25 of 41 35+ Great Political Movies Based on True Stories 785 VOTES Sometimes the truth is more entertaining than fiction, especially when it comes to films inspired by real-life political eve...
#40 of 50 The Best Oscar-Nominated Movies of the '80s 1.1k VOTES De Niro. Hepburn. Winfrey. The biggest movies of the 1980s captured audiences' imaginations thanks to outstanding performanc...
#29 of 50 The Worst Best Picture-Winning Films 35.7k VOTES These are the absolute worst Best Picture movies ever made, ranked by the Ranker community. This list is made up of best pic...
#9 of 33 The Best Historical Movies Released in the 1980s 685 VOTES What are the best historical movies from the 1980s? This list includes great historical movies such as Glory, Amadeus, and N...
#49 of 140 The Very Best Biopics About Real People 12.2k VOTES List of the best biopics ever made, as ranked by film critics and movie fans. History is filled with remarkable individuals ...
#159 of 194 The Best PG-13 Drama Movies 4.1k VOTES List of PG-13 drama movies, ranked from best to worst with movie trailers when available. This list takes the best PG-13 dra...
Premiere's The Must-Have Hollywood Movies DVD Collection 19.9k VIEWS Premiere's list of the top DVD's a movie-fan must own. These are movies you need to have in your collection if you consider ...
#234 of 422 The Best Columbia Pictures Movies 9.1k VOTES List of Columbia Pictures movies, ranked best to worst, including trailers, genres, and release dates. Columbia Pictures pro...
What Won Best Picture The Year You Were Born? 66.1k VIEWS Were you born the same year Meryl Streep cemented her legendary status by winning Best Supporting Actress in Best ...
#20 of 30 The Best Biopics About Real Politicians 602 VOTES There are many biopics that look at the lives of politicians and other political figures. But what are the best political ...
#10 of 67 The Best Peter O'Toole Movies 2.8k VOTES List of the best Peter O'Toole movies, ranked best to worst with movie trailers when available. Peter O'Toole's highest gros...
#2 of 20 The Best Movies Directed by Bernardo Bertolucci 467 VOTES List of all movies directed by Bernardo Bertolucci ranked from best to worst with photos. Films directed by Bernardo Bertolu...
#1 of 32 The Best Joan Chen Movies 142 VOTES List of the best Joan Chen movies, ranked best to worst with movie trailers when available. Joan Chen's highest grossing mov...

The Last Emperor is also found on...