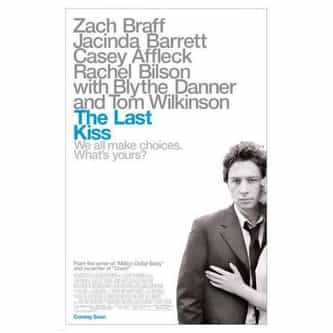 The Last Kiss is a 2006 American romantic comedy-drama film which is based on the 2001 Italian film L'ultimo bacio, directed by Gabriele Muccino. The plot revolves around a young couple and their friends struggling with adulthood and issues of relationships and commitment. The film stars Zach Braff, Jacinda Barrett, Casey Affleck and Rachel Bilson. The screenplay was written by Braff and Paul Haggis, and directed by Tony Goldwyn. Much of the movie was filmed in and around Madison, ... more on Wikipedia

The Last Kiss IS LISTED ON