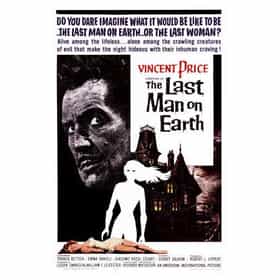 The Last Man on Earth

The Last Man on Earth is a 1964 science fiction horror film based on the Richard Matheson 1954 novel I Am Legend. The film was directed by Ubaldo Ragona and Sidney Salkow, and stars Vincent Price. The script was written in part by Matheson, but he was dissatisfied with the result and chose to be credited as "Logan Swanson". William Leicester, Furio M. Monetti, and Ubaldo Ragona were the other writers. It was filmed in Rome, Italy, with some location shots taken at Esposizione Universale Roma. It was released theatrically in the United States by American International Pictures and the UK in 1966. In the 1980s the film fell into the public domain. MGM Home Video, the current ... more on Wikipedia

lists about The Last Man on Earth

The Last Man on Earth is ranked on...

#54 of 111 The Best Movies About Disease Outbreaks 57k VOTES A list of the best movies with disease outbreaks. Are you a fan of movies about scary infections and crazy medical pandemics...
#37 of 204 The Best Zombie Horror Films 3.9k VOTES This list of the best zombie horror movies doesn't discriminate on why the zombies exist, it only screams in terror at the f...
#21 of 40 The Best Doomsday Movies Of All Time, Ranked 32.1k VOTES The best way to celebrate the end of the world is by watching the best Doomsday movies of all time to get in the mood. To th...
#66 of 108 The Best Apocalyptic And Post-Apocalyptic Movies 31k VOTES We all love a good apocalypse -- as long as it's fictional, of course. Whether you prefer the rip-roaring action of the Max ...
#47 of 95 The Greatest Vampire Movies of All Time 94.1k VOTES A list of the favorite vampire movies voted on by the Ranker Community. This is a Crowdranked list, so if you don't see...
#15 of 68 The Best '60s Horror Movies 5.9k VOTES LSD, Woodstock, JFK, MLK, The Beatles, and the moon landing - the 1960s were quite a decade, and saw the release of some of ...
#4 of 35 The Best '60s Vampire Movies 781 VOTES The greatest 1960s vampire movies have an interesting mix of kitsch, comedy, and gothic influences. Most of the entries on t...
16 Zombie Movies That Aren't Actually About Zombies 18.7k VIEWS We love a good zombie movie - and ever since George Romero's 1968 classic Night of the Living Dead, we've gotten plenty...
#11 of 87 The Best Vincent Price Movies 8.3k VOTES List of the best Vincent Price movies, ranked best to worst with movie trailers when available. Vincent Price's highest gros...
Old Futuristic Movies Whose Futures We've Passed 95.3k VIEWS Most of the visions of the future from old movies have not completely come to be. Flying cars are still a sci-fi dream, and ...
#14 of 29 The Best Movies That Have Only One Actor (Most of the Time) 1.2k VOTES This list contains information on the best movies with only one actor, ranked from best to worst by user votes. The best one...
#2 of 13 The Best 60s Zombie Movies 155 VOTES At the very top of this ranked list of 60s zombie movies you’ll most likely find the film that made zombie movies what they ...
#11 of 18 The Best '60s Disaster Movies 23 VOTES These are the best disaster movies from the ‘60s. Disaster films can impact the whole world a select group of people such as...

The Last Man on Earth is also found on...