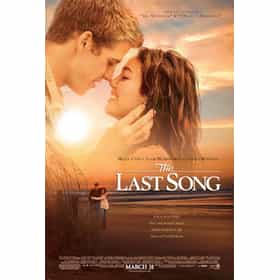 The Last Song is a 2010 American coming of age teen romantic drama film developed alongside Nicholas Sparks's novel by the same name. The film was directed by Julie Anne Robinson in her feature film directorial debut and co-written by Sparks and Jeff Van Wie. The Last Song stars Miley Cyrus, Liam Hemsworth, and Greg Kinnear and follows a troubled teenager as she reconnects with her estranged father and falls in love during a summer in a quiet Southern United States beach town. The film is released by Touchstone Pictures. ... more on Wikipedia

The Last Song is ranked on...

The Last Song is also found on...