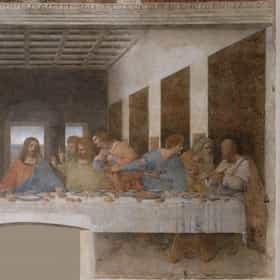 The Last Supper is a late 15th-century mural painting by Leonardo da Vinci in the refectory of the Convent of Santa Maria delle Grazie, Milan. It is one of the world's most famous paintings, and one of the most studied, scrutinized, and satirized. The work is presumed to have been commenced around 1495 and was commissioned as part of a scheme of renovations to the church and its convent buildings by Leonardo's patron Ludovico Sforza, Duke of Milan. The painting represents the scene of The Last Supper of Jesus with his disciples, as it is told in the Gospel of John, 13:21. Leonardo has depicted the consternation that occurred among the Twelve Disciples when Jesus announced that one of ... more on Wikipedia

The Last Supper is ranked on...

#4 of 167 People who voted for The Last Supper... also upvote Pirates of the Caribbean Franchise on The Most Rewatchable Movies also upvote Harry Potter Franchise on The Best Teen Movies of All Time The Most Amazing Pieces of Artwork Ever Made 53.1k VOTES Click on any list item to see replica pricing and more information! This is a CrowdRanked List of the most fantastic pi...
#5 of 200 The Best Paintings Of All Time 35.8k VOTES There have been so many paintings in such a wide range of subjects and movements across history that it can be difficult to ...
#1 of 24 The Best Paintings of The Last Supper 1k VOTES The Last Supper by Leonardo da Vinci is one of the most well-known paintings in all the world. The famous fresco stands as n...
13 Conspiracy Theories About Famous Paintings 142.8k VIEWS This list is for all you fans of The Da Vinci Code who can't get enough of art conspiracy theories. If t...
The Most Iconic and Influential Works of Art 154.1k VIEWS Each generation is defined by an image. Perhaps for the 90s it was the grunge movement. For the 80s, the iconic figure of Ma...

The Last Supper is also found on...