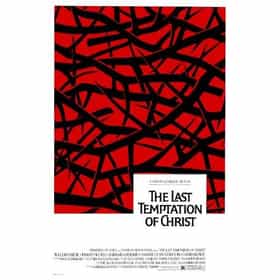 The Last Temptation of Christ

The Last Temptation of Christ is a 1988 American-Canadian epic drama film directed by Martin Scorsese. The film is a film adaptation of Nikos Kazantzakis' controversial 1953 novel of the same name. The film, starring Willem Dafoe, Harvey Keitel, Barbara Hershey, Andre Gregory, Harry Dean Stanton, and David Bowie, was shot entirely in Morocco. Like the novel, the film depicts the life of Jesus Christ and his struggle with various forms of temptation including fear, doubt, depression, reluctance and lust. ... more on Wikipedia

The Last Temptation of Christ is ranked on...

#318 of 599 The Greatest Epic Movies Ever Made 279k VOTES Need some movie ideas? Check out this list of the best epic films of all time, which encompasses some of the best movie...
#316 of 571 The Greatest Movies Of The 1980s, Ranked 515.1k VOTES Since it was one of the greatest decades for film, here's a list of the best movies of the 80s. These are the most popu...
#24 of 45 The Most Controversial Movies of All Time 90.8k VOTES Since the beginning of cinema, films have been pushing the boundaries of what society deems to be “acceptable entertainment....
#499 of 710 The Best Movies Roger Ebert Gave Four Stars 161.5k VOTES List of movies Roger Ebert gave four stars, ranked best to eh. This is NOT a complete list of all of Roger Ebert's four star...
#32 of 39 The Greatest Biblical Movies Ever Made 3.5k VOTES What are the best biblical movies? This list includes great biblical movies such as Noah, Ben Hur, and The 10 Commandments. ...
#182 of 212 The Best R-Rated Drama Movies 8.5k VOTES List of R-Rated drama movies, ranked from best to worst with movie trailers when available. This list takes the best R-Rated...
#118 of 214 The Best Universal Studios Movies List 11.4k VOTES List of Universal Studios movies, ranked best to worst, including trailers, genres, and release dates. Universal Studios pro...
#24 of 38 The Greatest Movies About Jesus Christ, Ranked 5.8k VOTES A list of the best-ever films featuring Jesus of Nazareth as a main character, ordered by the Ranker community. Vote for y...
All Jesus Christ Movies 363.4k VIEWS Jesus movies list is a compilation of all the best Jesus Christ movies ever made. This is a nearly complete list of movies f...
#2 of 14 The Best Passion Movies 84 VOTES A list of the best passion movies ever made, ranked by movie fans with film trailers when available. This passion movie list...

The Last Temptation of Christ is also found on...