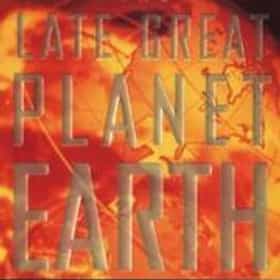 The Late, Great Planet Earth is the title of a best-selling 1970 book by Hal Lindsey with Carole C. Carlson, and first published by Zondervan. The book was adapted by Rolf Forsberg and Robert Amram in 1976 into a movie narrated by Orson Welles and released by Pacific International Enterprises. It was originally ghost-written by Carlson, whom later printings credited as co-author. Lindsey and Carlson went on to write several sequels, including Satan is Alive and Well on Planet Earth and The 1980s: Countdown to Armageddon. ... more on Wikipedia

The Late, Great Planet Earth is also found on...