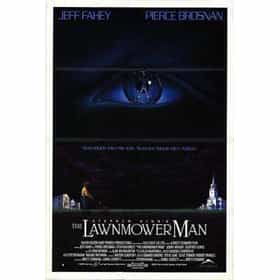 The Lawnmower Man is a 1992 American science fiction action horror film directed by Brett Leonard and written by Brett Leonard and Gimel Everett. The film is named after a Stephen King short story of the same title, but aside from a single scene, the stories are unrelated. The film stars Jeff Fahey as Jobe Smith, a simple-minded gardener, and Pierce Brosnan as Dr. Lawrence Angelo, the scientist who decides to experiment on him. The film was originally titled Stephen King's The Lawnmower Man, but King successfully sued the producers for attaching his name to the film and stated in court documents that the film "bore no meaningful resemblance" to his story. An earlier short ... more on Wikipedia

lists about The Lawnmower Man

The Lawnmower Man is ranked on...

#4 of 12 12 Crazy Takes On Virtual Reality From Movies That Aren't The Matrix 497 VOTES Virtual reality is really coming into its own these days, with VR technology being used in surprising ways across ...
#22 of 161 The Best B Movies of All Time 29.5k VOTES   A list of all the best b-movies ever made, many of which are streaming on Netflix and Amazon Prime. Check out which...
#51 of 54 The Best Sci-Fi Movies of the '90s 6.5k VOTES With the rise of computer graphics technology for special effects, '90s science fiction films took the sci-fi genre to a who...
#77 of 145 The Scariest Sci-Fi Movies Rated R 12.5k VOTES List of R-Rated sci-fi horror movies, ranked from best to worst with movie trailers when available. This list takes the best...
#23 of 24 What to Watch If You Love Ready Player One 1.4k VOTES Looking for something similar to Ready Player One? You're in luck, as you can find plenty of great TV shows and movies just ...
#40 of 48 The Best Movies About Technology 3.7k VOTES These are the greatest technology movies, as ranked by movie buffs voting on this list. Technology shapes the world around u...
#47 of 51 The Best Action Movies of 1992 314 VOTES List of the best 1992 action movies, ranked by how many upvotes they've received by other fans of the genre. These movies gi...
#20 of 23 The Worst CGI Sci-Fi Movies 80 VOTES Computer-generated imagery (CGI) has the ability to create grand, gorgeous, and epic computer animation on a small budget. H...

The Lawnmower Man is also found on...