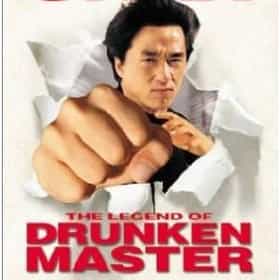 Drunken Master II is a 1994 Hong Kong kung fu film directed by Lau Kar-leung and Jackie Chan, who stars as Chinese folk hero, Wong Fei-hung. It was Chan's first traditional style martial arts film since The Young Master and Dragon Lord. The film was released in North America as The Legend of Drunken Master in 2000. The film is a follow-up to Chan's 1978 film Drunken Master, directed by Yuen Woo-ping, but not a direct storyline sequel. Another film, Drunken Master III features little in common with either this or its predecessor, and is not considered a sequel. In 2005, Drunken Master II was named one of the top 100 best films of all time by Time magazine. ... more on Wikipedia

The Legend of Drunken Master is ranked on...

#1311 of 1,699 The Most Rewatchable Movies 3.4M VOTES There are some movies that I always stop at and watch if I see them on TV or I can put in the DVD player and watch when I'm ...
#27 of 136 The Best Movies of 1994 17.7k VOTES A list of the best movies of 1994, from instant classics like Pulp Fiction to hilarious PG-13 Comedies like Dumb and D...
#11 of 15 Action Movie Sequels That Are Better Than The Originals 239 VOTES With all of the complicated, moving parts and people involved in making a movie, creating a successful film is an immen...
#193 of 735 The Greatest Action Movies of All Time 437.6k VOTES The greatest action movies of all time starring some of the best action stars to have ever fought on screen. The best action...
#4 of 413 People who voted for The Legend of Drunken Master... also upvote Charles Bronson on The All-Time Greatest Action Stars The All-Time Greatest Martial Art Movies 54.8k VOTES All the best movies with martial arts action compiled into a list of the best martial art movies. Martial arts movies are am...
#166 of 223 The Best R-Rated Action Movies of All Time, Ranked 34.8k VOTES Ready to marathon the best R-rated action movies? You do? Great! But now you have to decide which R-rated action movies qual...
#2 of 37 The Best Kung Fu Movies of the 1990s 1k VOTES On this list of the greatest ‘90s kung fu and other martial arts movies, you'll find all of your favorite action stars: Wesl...
#2 of 101 The Best Jackie Chan Movies of All Time 24.3k VOTES List of the best Jackie Chan movies, ranked best to worst with trailers when available. Kung fu fans will also enjoy the bes...
#2 of 141 The Best R-Rated Chinese Movies 1.1k VOTES List of R-Rated Chinese movies, ranked from best to worst with movie trailers when available. Be sure to also take a look at...
#15 of 50 The Best Action Movies of 1994 494 VOTES List of the best 1994 action movies, ranked by how many upvotes they've received by other fans of the genre. These movies gi...
#2 of 18 Best Restaurant Fight Scenes in Movies 76 VOTES We compiled the best restaurant fight scenes in movies. From Hollywood action movies to foreign films, the greatest fight sc...

The Legend of Drunken Master is also found on...