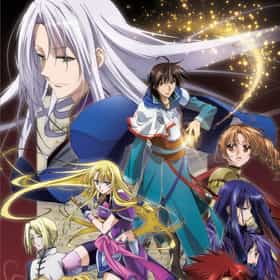 The Legend of the Legendary Heroes

The Legend of the Legendary Heroes is ranked on...

#31 of 130 The Best Fantasy Anime of All Time 377.1k VOTES From classics like Wolf's Rain to newer series like Sword Art Online, fantasy is one of the most popular genres of anime. Th...
#112 of 318 The Best English Dubbed Anime of All Time 969k VOTES If you're one of those people who only watches anime in Japanese, we don't blame you. English dubs can really ruin a series ...
#44 of 94 The Best Adventure Anime of All Time 147.4k VOTES Ready to go on an adventure? Here's our list of the best adventure anime of all time, ranked by anime fans like you. What cl...
#66 of 132 The Best Supernatural Anime 155.7k VOTES Do you have a taste for the supernatural when you watch anime? There's nothing wrong with that. In fact plenty of anime seri...
#25 of 28 The Best Anime Like Yona of the Dawn 1k VOTES A sheltered princess since birth, Yona has always thought her kingdom, Kouka, to be a peaceful one. But when her belove...
#19 of 20 The 20 Most Ridiculous Anime Titles In History 3.4k VOTES Whether it's because of poor translations or ideas that were wild to begin with, some anime have some seriously strange titl...
#21 of 32 The Best Anime Like Strike The Blood 1.1k VOTES When Kojou Akatsuki finds out that he is one of the most powerful vampires alive, his entire life changes. Despite...
#6 of 31 The Best Anime Like Katanagatari 283 VOTES Want recommendations for more anime like Katanagatari? Everybody loves a good action anime, especially when it falls un...
#11 of 16 The Best Anime Like Fairy Tail 6.5k VOTES What is the best anime show like Fairy Tail? Once you finish watching every episode the show has to offer, you might be lo...
#23 of 30 The Best Anime Like Campione! 891 VOTES Need some Campione anime recommendations? Since it's such a unique series, let's rank the best anime like Cam...
#10 of 30 The Best Anime Like Kaze No Stigma 1.2k VOTES Need some Kaze No Stigma anime recommendations? Since it's such an influential series, let's rank the best anime l...
#17 of 19 The Best Anime Like Demon King Daimao 1.6k VOTES Also known as Demon King Daimao, the TV anime Ichiban Ushiro No Daimaou adapts the first five volumes of the light nove...