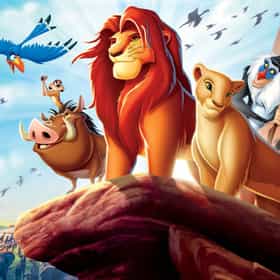 The Lion King is a 1994 American animated musical epic film produced by Walt Disney Feature Animation and released by Walt Disney Pictures. It is the 32nd animated feature in the Walt Disney Animated Classics series. The story takes place in a kingdom of lions in Africa, and was influenced by the biblical tales of Joseph and Moses and the Shakespearean play Hamlet. The film was produced during a period known as the Disney Renaissance. The Lion King was directed by Roger Allers and Rob Minkoff, produced by Don Hahn, and has a screenplay credited to Irene Mecchi, Jonathan Roberts and Linda Woolverton. ... more on Wikipedia

'The Lion King' Fan Theories That Just Might Be True 8.9k votes When The Lion King hit theaters in 1994, it was a box office juggernaut and a critical hit. It remained Disney's highest-gro...
The Lion King Is Full Of Baloney 995 votes The Lion King is a dumb movie that is full of baloney. None of it makes any sense! Everybody is always goin on and on about ...
Every Song in The Lion King, Ranked by Singability 1.3k votes Hakuna matata, we’re ranking the best songs from Disney's The Lion King. With music and lyrics by Elton John and Tim Rice, t...
What All The Character Names In 'The Lion King' Actually Mean 177.5k views One of the most incredible elements of The Lion King is its breathtaking scenes in the heart of Africa. What's more, all The...

The Lion King is ranked on...

The Lion King is also found on...