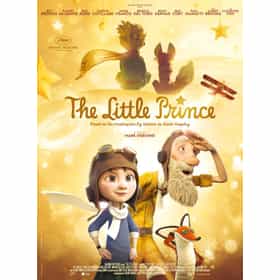 The Little Prince is an upcoming English-language French computer-animated stop-motion fantasy film directed by Mark Osborne. Irena Brignull wrote the script based on the 1943 novel of the same name by Antoine de Saint-Exupéry. The film uses stop motion animation for the novel's story and computer animation for an additional frame narrative. The film stars the voices of Marion Cotillard, Riley Osborne, James Franco, Mackenzie Foy, Jeff Bridges, Rachel McAdams and Benicio del Toro, and will be released on 29 July 2015. ... more on Wikipedia

The Little Prince is ranked on...

#323 of 599 The Best Animated Films Ever 918.8k VOTES The best animated movies of all time are an assortment of animated movies that rank among the best movies ever made. Wh...
#59 of 177 The Very Best Movies of 2016, Ranked 23.7k VOTES Hilarious comedies, thrilling superhero adventures, and engaging dramas comprise the very best films of 2016. The best 2016 ...
#11 of 30 The Best Children's and Kids' Movies on Netflix 124k VOTES   The Best Children's and Kids’ Movies on Netflix is a complete Netflix streaming list for your perusal. All the best...
#32 of 87 The Best James Franco Movies 5.2k VOTES List of the best James Franco movies, ranked best to worst with movie trailers when available. At the beginning of his actin...
#6 of 41 The Best New Fantasy Movies of the Last Few Years 314 VOTES What are the best new fantasy films? This is your chance to decide. The genre has been around since the beginning of cinema,...
#14 of 46 The Best Kids Movies Based On Books 1k VOTES These days, parents are spoiled for choice when it comes to entertainment for their kids. Whether it's the newest superhero ...