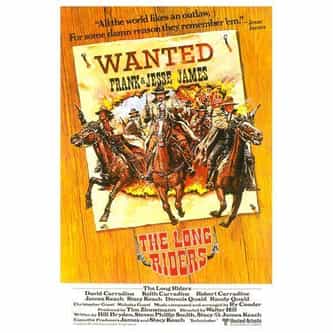 Tagline
"All the world likes an outlaw. For some damn reason they remember 'em." - Jesse James.

The Long Riders is a 1980 western film directed by Walter Hill. It was produced by James Keach, Stacy Keach and Tim Zinnemann and featured an original soundtrack by Ry Cooder. Cooder won the Best Music award in 1980 from the Los Angeles Film Critics Association Awards for this soundtrack. The film was entered into the 1980 Cannes Film Festival. ... more on Wikipedia

The Long Riders IS LISTED ON