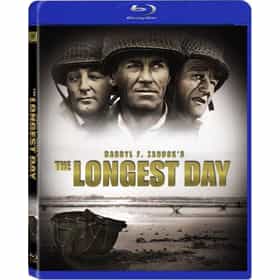 The Longest Day is a 1962 film based on the 1959 history book The Longest Day by Cornelius Ryan, about D-Day, the Normandy landings on June 6, 1944, during WWII. The film was produced by Darryl F. Zanuck, who paid the book's author Ryan US$175,000 for the film rights. The screenplay was by Ryan, with additional material written by Romain Gary, James Jones, David Pursall and Jack Seddon. It was directed by Ken Annakin, Andrew Marton, and Bernhard Wicki. ... more on Wikipedia

The Longest Day is ranked on...

The Longest Day is also found on...