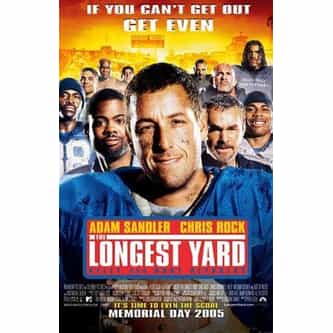 Tagline
It was hard to put a team together... until they found out who they were playing.

The Longest Yard is a 2005 American sports comedy film, a remake of the 1974 film of the same name. Adam Sandler plays the protagonist, Paul Crewe, a disgraced former professional quarterback for the Pittsburgh Steelers of the NFL, who is forced to form a team from the prison inmates to play football against their guards. Burt Reynolds, who played Sandler's role in the original, co-stars as Nate Scarborough, the inmates' coach. Chris Rock plays Crewe's friend, known as Caretaker. The cast ... more on Wikipedia