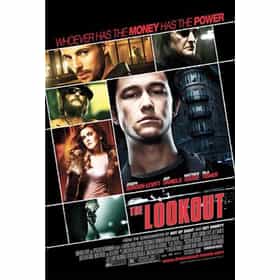 The Lookout is a 2007 film written and directed by Scott Frank, screenwriter of Out of Sight and Get Shorty, starring Joseph Gordon-Levitt, Jeff Daniels, Matthew Goode, and Isla Fisher. The Lookout is Frank's directorial debut. It was produced by Birnbaum/Barber, Laurence Mark Productions, Parkes/MacDonald Productions, Spyglass Entertainment, and Miramax Films. Miramax distributes the film in the USA, and Buena Vista International elsewhere. ... more on Wikipedia

The Lookout is ranked on...

The Lookout is also found on...