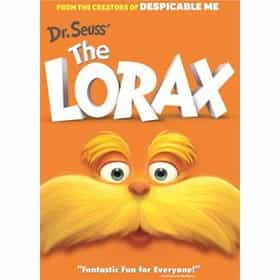 Dr. Seuss' The Lorax is a 2012 American computer-animated 3D musical fantasy comedy film produced by Illumination Entertainment and based on Dr. Seuss' children's book of the same name. The film was released by Universal Pictures on March 2, 2012, the 108th birthday of Dr. Seuss. It is the second adaptation of the book, following the 1972 animated musical television special. It builds on the book by expanding the story of Ted, the previously unnamed boy who visits the Once-ler. The cast includes Danny DeVito as the Lorax, Ed Helms as the Once-ler and Zac Efron as Ted. New characters introduced in the film are Audrey, who is voiced by Taylor Swift, Aloysius O'Hare, voiced by Rob Riggle, ... more on Wikipedia

lists about The Lorax

The Lorax Movie Quotes 137 votes 'The Lorax' movie quotes include some of the funniest and best lines from this 2012 animated film adaptation of the popular ...

The Lorax is ranked on...

The Lorax is also found on...