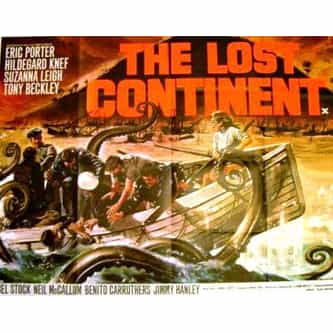 The Lost Continent is a 1968 fantasy film made by Hammer Films and Seven Arts featuring Eric Porter, Hildegard Knef, Suzanna Leigh, Tony Beckley and James Cossins. The film was produced, directed and written by Michael Carreras based on Dennis Wheatley's novel Uncharted Seas. The film sees the crew and passengers of the dilapidated tramp steamer Corita heading from Freetown to Caracas. While the passengers all have their own reasons for getting out of Africa, the captain of the ship is ... more on Wikipedia

The Lost Continent IS LISTED ON