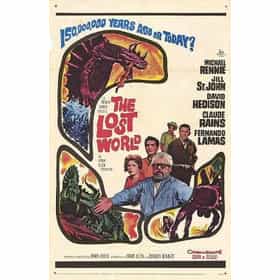 The Lost World is a 1960 fantasy adventure film loosely based on the novel of the same name by Arthur Conan Doyle and directed by Irwin Allen. The plot of the film revolves around the exploration of a mysterious flat mountain in the heart of unknown Venezuela inhabited by cannibalistic natives, dinosaurs, carnivorous plants, and giant spiders. The cast includes Claude Rains, David Hedison, Fernando Lamas, Jill St. John, and Michael Rennie. Special effects for the film were rather simple and involved monitor lizards, iguanas, and crocodiles affixed with miniature horns and fins. Director Allen later stated that though he wanted stop motion models, he could only work with lizards and ... more on Wikipedia

The Lost World is ranked on...

The Lost World is also found on...