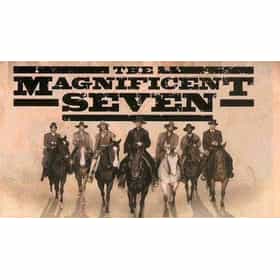 The Magnificent Seven is a 2016 American western action film directed by Antoine Fuqua and written by Nic Pizzolatto and Richard Wenk. It is a reimagination of the 1960 western film of the same name, which in turn was a remake of the 1954 Japanese film Seven Samurai. The film stars Denzel Washington, Chris Pratt, Ethan Hawke, Vincent D'Onofrio, Lee Byung-hun, Manuel Garcia-Rulfo, Martin Sensmeier, Haley Bennett and Peter Sarsgaard. It is the final film of composer James Horner, who died the previous year after composing a part of the score; his friend Simon Franglen completed the music. ... more on Wikipedia

The Magnificent Seven is ranked on...

#222 of 394 The Best Western Movies Ever Made 370.7k VOTES The best Western movies ever made include some true classics from the early days of cinema, and more modern day films that c...
#21 of 74 The Most Anticipated Movies of 2016 64.6k VOTES If 2015 taught us anything at the movies, it’s that big budget flicks are just as popular as ever. A total of 61 films gross...
#2 of 44 The Best New Western Movies of the Last Few Years 1.9k VOTES It's time to vote for the best new western films. When most people think of this genre, they think of action westerns starri...
#476 of 735 The Greatest Action Movies of All Time 437.6k VOTES The greatest action movies of all time starring some of the best action stars to have ever fought on screen. The best action...
#1 of 46 The Best Action Movies On Amazon Prime 6.4k VOTES The Best Action Movies on Amazon Prime is a complete Amazon Prime streaming list for your perusal. All the best action films...
#5 of 26 Best Chris Pratt Movies 1.1k VOTES List of the best Chris Pratt movies, ranked best to worst with movie trailers when available. Chris Pratt started his acting...