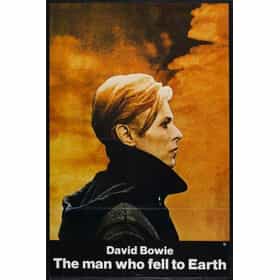 The Man Who Fell to Earth is a 1976 British science fiction film directed by Nicolas Roeg. The film is based on the 1963 novel of the same name by Walter Tevis, about an extraterrestrial on Earth seeking a way to ship water to his planet, which is suffering from a severe drought. The film maintains a strong cult following for its use of surreal imagery and its performances by David Bowie, Candy Clark, and Hollywood veteran Rip Torn. The same novel was later remade as a less successful 1987 television adaptation. The film was produced by Michael Deeley and Barry Spikings, who reunited two years later for work on another epic, The Deer Hunter. ... more on Wikipedia

The Man Who Fell to Earth is ranked on...

#132 of 193 The Best Alien Movies Ever Made 249.9k VOTES The best alien movies, ranked by fans of space and sci-fi genres. Alien movies can take several forms. What are the best ali...
#134 of 591 The Best '70s Movies 69.4k VOTES This list of the best movies of the '70s includes all of the top films from the 1970s, including some of the best movies eve...
#38 of 41 What To Watch If You Love 'Arrival' 792 VOTES Here is an expansive list of what to watch after Arrival. Nominated for Best Picture at the 2017 Academy Awards, A...
#21 of 25 The Best Science Fiction-y Psychological Dramas 1.9k VOTES When psychological dramas bring in elements of classic science fiction, the result can be a mind-bending movie-g...
#251 of 567 The Greatest Sci-Fi Movies of All Time 550.6k VOTES What are the greatest sci-fi movies of all time? Science fiction films are among the most popular movies in cinematic h...
#22 of 202 The Best Movies of 1976 7.9k VOTES List of the best movies of 1976, with movie trailers when available. Lots of current movie stars were born in 1976, includin...
#41 of 47 The Best Movies About UFOs 4.4k VOTES Nothing is more fascinating and horrific than the thought of life on another planet coming down and invading the earth in a ...
#34 of 52 The Best '70s Sci-Fi Movies 5k VOTES Star Wars is probably the most well known 1970s science fiction movie, but don't count out the other strong contenders on th...
#23 of 26 The Best Intelligent Alien Movies of All Time 19.2k VOTES Aliens are often depicted as intelligent life forms, yet a great deal of alien movies from the past don't necessarily warran...
#22 of 23 The Best First Contact Movies 3.1k VOTES A list of the best first contact movies ever made, ranked by film fans' votes. This list is ordered by popularity, so only t...
#34 of 99 The Best Rip Torn Movies of All Time, Ranked 861 VOTES Are looking for the best Rip Torn movies? Then you’ve come to the right place. This list has every movie on Rip Torn’s filmo...
#2 of 28 People who voted for The Man Who Fell to Earth... also upvote Ashes to Ashes on The Best David Bowie Songs of All Time also upvote Life On Mars on The Best David Bowie Songs of All Time The Best David Bowie Movies 3.9k VOTES List of the best David Bowie movies, ranked best to worst with movie trailers when available. David Bowie is best known for ...
#7 of 18 The Best '70s Alien Movies 610 VOTES The 1970s saw the production of some of the best alien films ever made. It seems that every classic alien movie stemmed from...

The Man Who Fell to Earth is also found on...