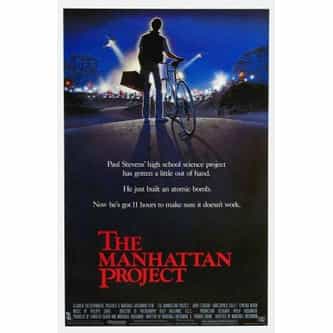 The Manhattan Project is an American film, released in 1986. Named after the WWII-era program that constructed the first atomic weapons, the plot revolves around a gifted high school student who decides to construct an atomic weapons for a national science fair. It was directed by Marshall Brickman, based upon his screenplay co-written with Thomas Baum, and starred John Lithgow, Christopher Collet, John Mahoney, Jill Eikenberry and Cynthia Nixon. ... more on Wikipedia

The Manhattan Project IS LISTED ON