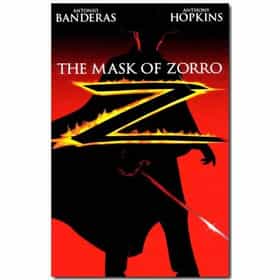 The Mask of Zorro

The Mask of Zorro is a 1998 American swashbuckler film based on the Zorro character created by Johnston McCulley. It was directed by Martin Campbell and stars Antonio Banderas, Anthony Hopkins, Catherine Zeta-Jones, and Stuart Wilson. In the story, the original Zorro escapes from prison to find his long-lost daughter and avenge his wife against the governor. He is aided by his successor, who also pursues his own vendetta. Steven Spielberg's Amblin Entertainment had developed the film for TriStar Pictures with directors Mikael Salomon and Robert Rodriguez before Campbell signed on in 1996. ... more on Wikipedia

The Mask of Zorro is ranked on...

The Mask of Zorro is also found on...