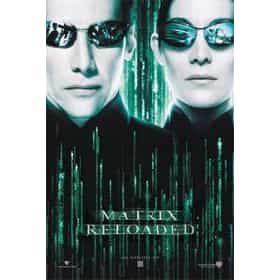 The Matrix Reloaded is a 2003 American science fiction action film, the first sequel to The Matrix, and the second installment in The Matrix trilogy, written and directed by The Wachowski Brothers. It premiered on May 7, 2003, in Westwood, Los Angeles, California, and went on general release by Warner Bros. in North American theaters on May 15, 2003, and around the world during the latter half of that month. It was also screened out of competition at the 2003 Cannes Film Festival. The video game Enter the Matrix, which was released on May 15, and a collection of nine animated shorts, The Animatrix, which was released on June 3, supported and expanded the storyline of the film. The ... more on Wikipedia

lists about The Matrix Reloaded

37 Things You Didn't Know About 'The Matrix' Trilogy 22.5k votes The Matrix is already over 15 years old and its sequels were released more than 10 years ago, but their impact is still felt...
The Best Characters in the Matrix Series, Ranked 2k votes Film buffs, we are ranking the greatest characters in The Wachowskis' The Matrix franchise. From The Matrix Trilogy, the bes...

The Matrix Reloaded is ranked on...

The Matrix Reloaded is also found on...