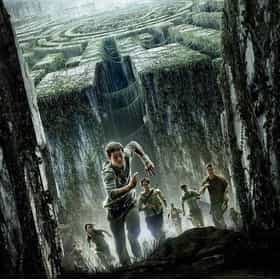 The Maze Runner is a 2014 American science fiction dystopian action thriller film directed by Wes Ball, based on James Dashner's 2009 novel of the same name. The film is the first installment in The Maze Runner film series and was produced by Ellen Goldsmith-Vein, Wyck Godfrey, Marty Bowen, and Lee Stollman with a screenplay by Noah Oppenheim, Grant Pierce Myers, and T.S. Nowlin. The film stars Dylan O'Brien, Aml Ameen, Kaya Scodelario, Thomas Brodie-Sangster, Will Poulter, and Ki Hong Lee. Principal photography began in Baton Rouge, Louisiana on May 13, 2013 and officially concluded on July 12, 2013. The Maze Runner was released on September 19, 2014 in the United States by 20th ... more on Wikipedia

The Maze Runner is ranked on...

#31 of 162 The Best Movies of 2014 65.9k VOTES Sure there are the Oscars, Golden Globes, and a number of other award ceremonies that hand out trophies to movies that are v...
#55 of 86 The 35+ Greatest Dystopian Action Movies 19.1k VOTES Some of the best films depict a bleak future. Lucky for movie-goers, this type of dystopian despair has led to some of the b...
#162 of 347 The Best Movies Based On Books 136k VOTES List of the best movies based off books, voted on by cine-bibliophiles everywhere. Many movies are based off of books but wh...
#11 of 78 The Best Film Adaptations of Young Adult Novels 56.7k VOTES List of best movies based on young adult literature written by some of the best young adult writers. These films were all in...
#76 of 160 The Best Dystopian And Near Future Movies 100.1k VOTES The best dystopian and near future movies are the films that make us a little more thankful for the Starbucks line every mor...
#4 of 12 The Most Apocalyptic YA Dystopias Of The 2010s 187 VOTES There were several depressing dystopias in 2010s young adult fiction that were adapted for film or television, each of ...
#16 of 42 The Best Coming of Age Movies About Boys 1k VOTES The future is bright for the young leading men of classic coming of age films. The best boys coming of age movies feature bo...
#9 of 28 The Best Thriller Films of 2014 1.3k VOTES Did you find yourself on the edge of your seat while watching an exciting movie this year? You were probably watching one of...
#11 of 38 The Best Bro Movies of 2014 2.4k VOTES Sometimes you've just gotta round up the fellas and catch a manly matinee at the movie theater. It's all part of the bromanc...
#417 of 567 The Greatest Sci-Fi Movies of All Time 549.3k VOTES What are the greatest sci-fi movies of all time? Science fiction films are among the most popular movies in cinematic h...
#74 of 102 The Best Action Movies Of The 2010s, Ranked 17.6k VOTES Buckle up, because it's time to vote for the top 2010s action movies. This has been an extraordinary decade for action ...
#27 of 107 The Best Thrillers Of The 2010s Decade 4.8k VOTES What are the best thriller movies of the decade? That's what this list will determine with help from you. Below, you'll...
#59 of 107 The Best Sci-Fi Movies Of The 2010s Decade 4.5k VOTES Science fiction fans need to step forward because it's time to vote for the best sci-fi movies of the decade. The ...
#176 of 259 The Best PG-13 Action Movies 53.2k VOTES A list of PG-13 action movies, ranked from best to worst with movie trailers or clips when available. These action movies ar...
#4 of 181 The Best PG-13 Teen Movies 103.2k VOTES While you often find the best humor, drama, or suspense in R-rated films, some of the best movies are those more geared towa...
#92 of 285 The Best Teen Movies of All Time 677.7k VOTES Need a new movie to watch? Here's a list of the best teen movies and films about teenagers, adolescence, and high school. Wh...
#2 of 60 The Best PG-13 Sci-Fi Adventure Movies 4.3k VOTES List of PG-13 sci-fi adventure movies, ranked from best to worst with movie trailers when available. This list takes the bes...
#46 of 89 The Best Sci Fi Thriller Movies, Ranked 8.5k VOTES This list contains information on the best sci-fi thriller movies, ranked from best to worst by user votes. The best sci-fi ...
#27 of 50 Good Movies for 12 Year Olds 25.5k VOTES This list has all manner of excellent movies for 12 year olds, ranked from best to worst by user votes. The best movies...
#28 of 32 The Best Action Movies Based on Books 418 VOTES Reading may seem like a peaceful activity, but many of the best action films have been adapted from books. The bes...
#19 of 47 Good Movies for ESL Students to Watch 635 VOTES Walk into any classroom in the United States where they are teaching English as a Second Language (ESL) and you will find te...
#1 of 18 What To Watch If You Love 'Divergent' 492 VOTES Wondering what to watch after Divergent? This list has you covered. The popular sci-fi film, which includes an out...
#11 of 11 The Best Running Movies 526 VOTES A list of the best running movies. These are films that feature running as either a sport or as simply a central theme to th...
Which Post-Apocalyptic World Would You Survive Based On Your Zodiac Sign? 10.5k VIEWS The world is a cruel place, but it's significantly crueler after the apocalypse. That's part of the reason post-apocalyptic ...