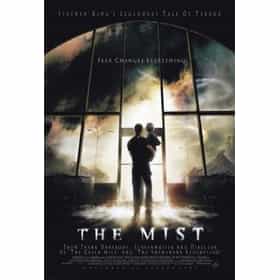 The Mist is a 2007 American science fiction horror film based on the 1980 novella of the same name by Stephen King. The film was written and directed by Frank Darabont, who had previously adapted Stephen King's works The Shawshank Redemption and The Green Mile. Darabont had been interested in adapting The Mist for the big screen since the 1980s. The film features an ensemble cast including Thomas Jane, Marcia Gay Harden, Samuel Witwer, Toby Jones, Nathan Gamble, William Sadler, Andre Braugher, Frances Sternhagen, and future The Walking Dead actors Jeffrey DeMunn, Laurie Holden, and Melissa McBride. ... more on Wikipedia

The Mist is ranked on...

The Mist is also found on...