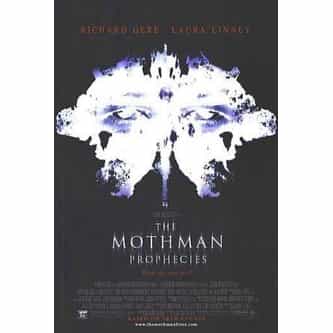 Tagline
What do you see?

The Mothman Prophecies is a 2002 supernatural thriller film directed by Mark Pellington, based on the 1975 book of the same name by parapsychologist and Fortean author John Keel. The screenplay was written by Richard Hatem. The film stars Richard Gere as John Klein, a reporter who researches the legend of the Mothman. The film claims to be based on actual events that occurred between November 1966 and December 1967 in Point Pleasant, West Virginia. Critical reviews were mixed, but the film ... more on Wikipedia

The Mothman Prophecies IS LISTED ON