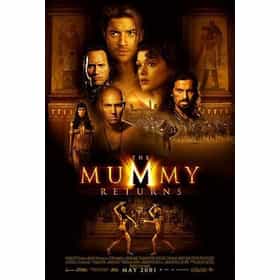 The Mummy Returns, is a 2001 American fantasy adventure film written and directed by Stephen Sommers, starring Brendan Fraser, Rachel Weisz, John Hannah, Arnold Vosloo, Oded Fehr, Patricia Velásquez, and Dwayne "The Rock" Johnson. The film is a sequel to the 1999 film The Mummy. The Mummy Returns inspired the 2002 prequel/spin-off film The Scorpion King which is set 5,000 years prior and whose eponymous character, played by Dwayne Johnson, was introduced in this film. It was followed by the 2008 sequel The Mummy: Tomb of the Dragon Emperor. ... more on Wikipedia

The Mummy Returns is ranked on...

The Mummy Returns is also found on...