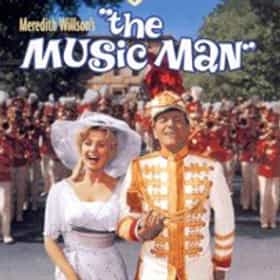 The Music Man is a 1962 musical film starring Robert Preston as Harold Hill and Shirley Jones as Marian Paroo. The film is based on the 1957 Broadway musical of the same name by Meredith Willson. The film was one of the biggest hits of the year and highly acclaimed critically. In 2005, The Music Man was selected for preservation in the United States National Film Registry by the Library of Congress as being "culturally, historically, or aesthetically significant". ... more on Wikipedia

The Music Man is ranked on...

#13 of 371 The Best Musical Movies of All Time 152.4k VOTES The best musical movies of all time, ranked by fans and critics. This list include both the best original musical movies and...
#251 of 410 The Best Rainy Day Movies 174.3k VOTES For many, rainy days are no fun—but it doesn't have to be that way. A great way to spend such days is watching movies, ...
#15 of 23 The Best Musical Movies Nominated for Best Picture 1.2k VOTES Sometimes, movies can inspire you to break out into song. No wonder so many movie musicals have been nominated for the Aca...
#41 of 100 The Best Dance Movies Ever Made 21.7k VOTES Dance movies have been around since the inception of film: the best dance movies manage to make the audience care about the ...
#6 of 34 The Very Best Classic Musical Movies, Ranked 4.9k VOTES Sometimes it's easier to say things in a song. At least, that's the case in classic musical movies. The best old musical m...
#33 of 324 The Best Warner Bros. Entertainment Movies List 5.8k VOTES List of Warner Bros. Entertainment movies, ranked best to worst, including trailers, genres, and release dates. Warner Bros....
#26 of 163 The Best Musical Movies Rated G 8k VOTES A list of the best G-Rated musical movies ever made, ranked by film fans' votes. This list is ordered by popularity, so only...
#21 of 61 The Best Comedy Movies of the 1960s 6.7k VOTES The 1960s was a great decade for comedy. With the counterculture flourishing, the Cold War looming, and tensions in Vietnam ...
#26 of 36 The Best 1960s Family Movies 1.7k VOTES The hills are alive with the sound of '60s family movies. Some of the best family films ever made are here on this list of 1...
#20 of 101 The Best G-Rated Romance Movies 2.8k VOTES List of G-Rated romance movies, ranked from best to worst with movie trailers when available. This list takes the best G-Rat...
#27 of 50 The Best Kids Movies of the 1960s 4.1k VOTES In the 1960s, musicals were king. On this list of the greatest 1960s kids movies, you will see a number of enduringly popula...
#34 of 137 The Best Music Movies 8.9k VOTES A list of all the best music movies ever made, ranked by movie fans. This music movie list can be sorted by cast, year, dire...
#7 of 27 The Best Ron Howard Movies 411 VOTES List of the best Ron Howard movies, ranked best to worst with movie trailers when available. Ron Howard's highest grossing m...

The Music Man is also found on...