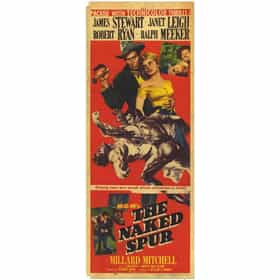 The Naked Spur is a 1953 Technicolor American western film directed by Anthony Mann and starring James Stewart, Janet Leigh, and Robert Ryan. Written by Sam Rolfe and Harold Jack Bloom, the film is about a bounty hunter who tries to bring a murderer to justice, and is forced to accept the help of two strangers who are less than trustworthy. The original music score was composed by Bronislau Kaper and the cinematography was by William C. Mellor. The Naked Spur was filmed on location in Durango and the San Juan Mountains in Colorado, and Lone Pine, California. The film was nominated for an Academy Award for Best Original Screenplay—a rare honor for a Western. This is the third Western ... more on Wikipedia

The Naked Spur is ranked on...

The Naked Spur is also found on...

James Stewart Western Roles List of All Movies Released in 1953