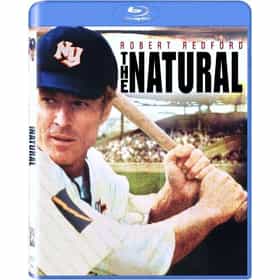 The Natural is a 1984 sports drama. It is a film adaptation of Bernard Malamud's 1952 baseball novel of the same name, directed by Barry Levinson and starring Robert Redford, Glenn Close, and Robert Duvall. The film, like the book, recounts the experiences of Roy Hobbs, an individual with great "natural" baseball talent, spanning decades of Roy's success and his suffering. It was the first film produced by TriStar Pictures. The film was nominated for four Academy Awards, including Best Supporting Actress, and nominated for a Golden Globe Award for Best Supporting Actress. ... more on Wikipedia

The Natural is ranked on...

The Natural is also found on...