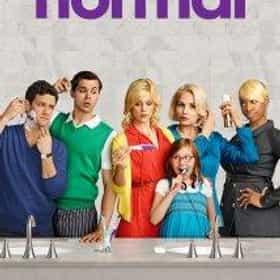 The New Normal is an American sitcom that aired on NBC from September 10, 2012 to April 2, 2013. The series was created and principally written by Ryan Murphy and Ali Adler. The storyline follows wealthy gay couple Bryan and David, who are living in Los Angeles. Deciding to have a child, they choose a surrogate mother, Goldie Clemmons, who moves into their home with her 9-year-old daughter Shania. The series aired Tuesdays at 9:30 pm Eastern/8:30 pm Central after the new comedy series Go On, as part of the 2012–13 United States network television schedule. On October 2, 2012, NBC commissioned a full season of The New Normal. The New Normal was officially canceled on May 11, 2013. ... more on Wikipedia

The New Normal is ranked on...