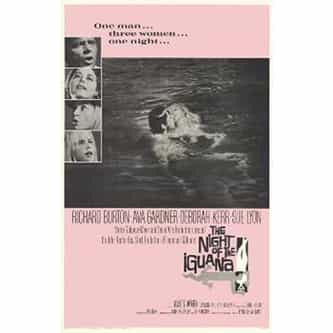 The Night of the Iguana

The Night of the Iguana is a 1964 film based on the 1961 play of the same name written by Tennessee Williams. Directed by John Huston, it featured Richard Burton, Ava Gardner, and Deborah Kerr. The film won the 1964 Academy Award for Best Costume Design, and was nominated for the Academy Awards for Best Art Direction and Best Cinematography. Actress Grayson Hall received an Academy Award nomination for Best Supporting Actress, and Cyril Delevanti received a Golden Globe nomination for Best ... more on Wikipedia

The Night of the Iguana IS LISTED ON

#33 of 109
3.9k VOTES The Best Movies of 1964
#3 of 57
3.2k VOTES The Best Richard Burton Movies
#1 of 59
1.8k VOTES The Best Ava Gardner Movies
Every Oscar Winning Film Ever Romance Movies and Films Gay Movies: List of All Gay Films Movies Written By Tennessee Williams Movies Directed By John Huston List of All Movies Released in 1964 Famous Movies Filmed in Mexico