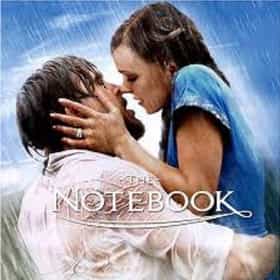 The Notebook is a 2004 American romantic drama film directed by Nick Cassavetes and based on the novel of the same name by Nicholas Sparks. The film stars Ryan Gosling and Rachel McAdams as a young couple who fall in love during 1940. Their story is narrated from the present day by an elderly man telling the tale to a fellow nursing home resident. The Notebook received mixed reviews but performed well at the box office and received several award nominations, winning eight Teen Choice Awards, a Satellite Award and an MTV Movie Award. The film became a sleeper hit and has gained a cult following. On November 11, 2012, ABC Family premiered an extended version with deleted scenes added ... more on Wikipedia

lists about The Notebook

What to Watch If You Love The Notebook 443 votes If you’re looking for TV shows and movies like The Notebook, you’ll find some excellent options here. For The Notebook fans ...
These Quotes From 'The Notebook' Will Have You In Tears 96 votes Have tissues ready while you're reading the best quotes from The Notebook. Starring Ryan Gosling and Rachel McAdams, the 200...

The Notebook is ranked on...

The Notebook is also found on...