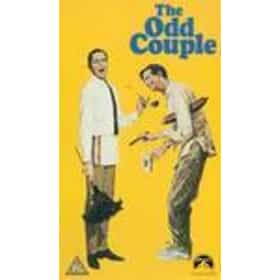 The Odd Couple is a 1968 American black comedy film written by Neil Simon, based on his play The Odd Couple, directed by Gene Saks, and starring Jack Lemmon and Walter Matthau. It is the story of two divorced men – neurotic neat-freak Felix Ungar and fun-loving slob Oscar Madison – who decide to live together, even though their personalities clash. The film was highly successful with critics and audiences, grossing over $44.5 million, making it the fourth highest-grossing picture of 1968. The success of the film was the basis for the ABC television sitcom of the same name, starring Tony Randall as Felix and Jack Klugman as Oscar. ... more on Wikipedia

The Odd Couple is also found on...