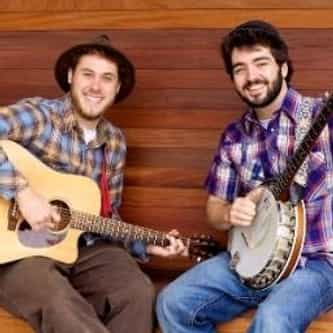 Albums
Through the Woods
Take It Outside
Can You Canoe?
Kids with Beards

The Okee Dokee Brothers are an independent American bluegrass and American roots children's music duo from Minneapolis. Their 2012 CD/DVD release Can You Canoe? won a GRAMMY for Best Children's Album in the 55th GRAMMY Awards. They released their second CD/DVD called Through the Woods in May 2014, with music and videos created during a 2013 trek down the Appalachian Trail. The album garnered a GRAMMY nomination in 2014. ... more on Wikipedia

The Okee Dokee Brothers IS LISTED ON

i cut off all contact with my mother, breaking in song, song titles with the word would, solo artists that were in bands, riff raff albums, did little master title song, karaoke songs 2019, moving to the country song, round and round, good rap songs